Certainly doesn’t sound all that shocking, does it? But it’s quite a change for me. I’ve owned and enjoyed seven BlackBerry devices over the last four years, including my first smartphone. I’ve also been quite critical of the phone from Cupertino during that time, though not without reason.

But this had to happen eventually. In between all those BlackBerrys, I’ve owned an Android and Windows Phone device – iOS was the last major platform I hadn’t used. And if you go even further back to the launch of the original iPhone in 2007, the device played a major role in making me a phone geek. Its launch was huge, disrupting the industry significantly enough to nearly kill both Nokia and BlackBerry, darlings of the smartphone world at the time.

A lot of things have changed in the seven and a half years since. But I still remain a geek, and my curiosity has been getting to me. So, when I spotted a great deal on the iPhone 6, I figured it was time to take this iconic phone for a spin.

The iPhone 6 design is a bit of a mixed bag. It has a well-built, slim, metal body that feels great in the hand – the type of thing we’ve come to expect from iPhones. But that body comes with its drawbacks. It feels a little fragile and is also quite slippery, forcing me to constantly worry about dropping it.

Then there’s the camera. We’ve gotten to a point in phone technology where devices are so ridiculously thin that the camera has to stick out ever-so slightly. I’m not an engineer, but I feel that making the phone body thicker to compensate would have been a more elegant solution, maybe even allowing Apple to stick a bigger battery in while they’re at it.

This phone is seriously snappy. Sure, a 1.4GHz dual-core processor and 1GB of RAM may not sound impressive alongside something like the BlackBerry Passport, with a 2.2GHz quad-core CPU and 3GB of RAM. But there’s a lot more to it than the figures suggest.

One of the greatest advantages the iPhone has is a 64-bit processor. While other manufacturers have only just begun to roll out 64-bit handsets, Apple has been using such an architecture since the iPhone 5S. For lots of complicated technical reasons that we could discuss for weeks, this provides some notable performance advantages.

Apple also has another performance trick up their sleeves – the company designs its own software and hardware, allowing the two to be optimized for one another. The end result? Industry-leading benchmark results, and a fairly seamless day-to-day experience.

Having said all that, I did run into at least one instance where RAM appeared to be a limitation – some serious multitasking slowed the phone significantly, and also forced the phone to close apps running in the background. The apps still appeared in the multitasking view, but took a moment to relaunch upon selection. 2GB of RAM is a must for the next iPhone, especially as we get used to doing more and more straight from our phones.

The camera is another area where the iPhone’s figures can be a little misleading. The iPhone 6 packs an eight-megapixel shooter around the rear, which may seem a little low by modern standards – even the BlackBerry Passport has 13MP. But as any good photographer will tell you, megapixels are mostly irrelevant. The iPhone’s camera uses great optics, large pixels and phase-detection autofocus in order to yield some pretty fantastic results. It snaps photos quickly, sharply, and with very accurate colours, producing shots that are right up there with the Nokia Lumia 1020.

The lack of megapixels does come with one drawback however – zooming in tends to spit out low-quality photos. It would’ve also been a nice touch if Apple threw in optical image stabilization like they do with the 6 Plus. Though the 6 doesn’t struggle with low-light photos more than you’d expect a high-end smartphone to, any improvement in this area is much appreciated.

I expected the iPhone to disappoint me here – the 1810 mAh battery is tiny, especially compared to the 3450 mAh beast in the BlackBerry Passport. Fortunately, I haven’t had any significant issues with battery life. The phone always lasted me a full day, and can go two if you’re using it lightly around WiFi. Kudos to Apple here, they’ve built a seriously efficient smartphone.

Coming from a BlackBerry, this is where the iPhone really shines. The ecosystem is simply immense – there’s a limitless number and variety of apps and accessories compatible with the iPhone. There’s also plenty of services provided out-of-the-box, such as iCloud and iTunes. And if you own a Mac or an iPad, the phone will integrate beautifully with them through features like Handoff.

Android does a good job of matching this ecosystem – though a lot of apps come to iOS first, Google’s OS still has most of what you’d want. But when you come from a platform like BlackBerry or Windows Phone, this is likely a big part of the reason why. YouTube, Snapchat and Google Maps are all examples of apps that, officially-speaking, are not available on BlackBerry nor Windows Phone. There are workarounds and third-party alternatives, but nothing beats going right into an app store and getting exactly what you want.

Fingerprint readers have historically been large, steaming piles of excrement. But the iPhone’s is so damn good, I had to dedicate an entire section to mentioning it. Touch ID, integrated into the home button, is the single most convenient phone lock I’ve encountered on any platform. Hold your finger briefly on the home button and bam, your phone is unlocked. You can program up to five fingers, allowing you to use Touch ID even if the phone is lying on your desk or in a different hand.

Touch ID is also used as an additional form of authentication for Apple Pay, and can be used in lieu of your password by certain apps, like password managers or the App Store. This means you can set complex passwords, write them down in a secure place, and only have to refer to them if you lose your phone or access the services from a different device.

It’s not entirely infallible, as it is possible to spoof someone’s fingerprint if you try really hard, but you’d have to be quite specifically targeted for such a thing to occur. Otherwise, fingerprint data is stored on a secure enclave in the CPU and would be pretty darn difficult to get at. The data is never transmitted to the operating system or any apps using Touch ID – instead, a yes/no token is used to authenticate. It’s all extremely well-designed, credit where credit’s due.

The Not So Good

Not everything is great, of course. BlackBerry is still unbeatable at their email and calendar apps. The iPhone’s stock email app is pretty awful, lacking any formatting options or a way to add attachments. It also failed to receive emails from one of my IMAP accounts, a problem I’ve not encountered with any other email client. The calendar app is not quite so bad, but BlackBerry’s counterpart has a much nicer layout.

Of course, the iPhone has third-party alternatives to help out with these issues, but nothing I’ve tried has been able to match my BlackBerry – especially without a true unified inbox for all your messages and notifications. As a result, I reached for my Passport every time I needed to send an email.

Any significant amount of typing also feels better on the Passport – the combination of wide screen and physical keyboard make it a much nicer device for typing out longer messages and documents, as well as reading them. The iPhone 6 keyboard is not terrible, mind you, but it’s hard to beat the feel and touch-typing capability of physical keys, even with the Passport’s bizarre layout.

As far as bugs go, there were a few minor ones here and there, but I only really ran into one that’s worth mentioning – when I used Apple Maps to navigate, it asked me to merge onto a street I was already on, and then asked me to make a U-turn where I was supposed to be turning left. Maybe it does a better job most of the time, but that was enough for me to give up and download Google Maps. 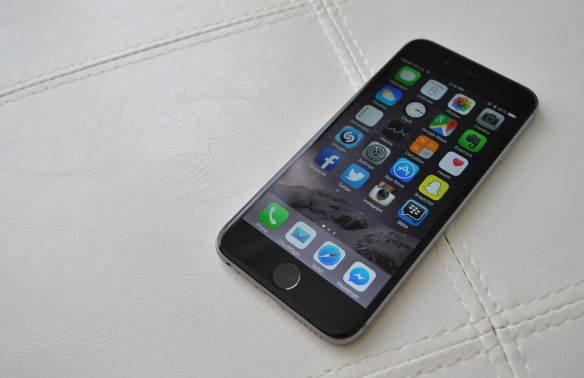 BlackBerry 10 aimed to create such a phone, combining BlackBerry’s strong suits with the power of modern smartphones. But for a large number of reasons, it failed to do so. It’s modernized the BlackBerry experience with quick and reliable phones, but it’s still not quite as good at the kind of things we’ve expected our smartphones to do ever since the iPhone arrived – web browsing, gaming, photography, and so on.

Nonetheless, BlackBerry 10 is good enough at those things. What it really lacks is an ecosystem. If I go out and buy a smartwatch today, there’s no guarantee it will always (or ever) be fully-functional with BlackBerry 10 devices. If I want to backup my phone, BlackBerry has no seamless service to do this over-the-air. If a new must-have app releases next week, BlackBerry 10 may never have a client for it.

There’s also no guarantee that Instagram won’t clamp down on the third-party client I use at any time – a client which lacks many features to begin with. And even with the apps that are there, you know they’ll never be updated and maintained as religiously as their iOS equivalent, because the userbase is tiny. This is a catch-22 that nobody is entirely certain how to fix – if people buy the phones, the apps will come, but how do you get people to buy into a phone without an ecosystem in 2015?

Over the last little while, I’ve maintained that there’s no such thing as a bad smartphone. And though my little experiment with the iPhone seems to have proven me right, it’s also shown that the smartphone world is still imperfect. You can’t always have your cake and eat it too. But the iPhone 6, despite not quite meeting my own needs, is the first phone I’d recommend to most of the people I know.